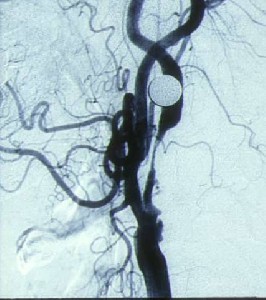 Abdominal aneurysm figure
PERIPHERAL ARTERIAL DISEASE
SUPOSES progressive occlussion or dilation of blood vessels provoking severe complications
Although there are a variety of situations, this disease is often the result of atherosclerosis and the progressive deterioration of the arteries. The most common effect is usually arteriosclerosis obstruction vessel lumen causing a decrease in the carrying capacity of the blood and consequently a difficulty in the irrigation of different organs.
Atherosclerosis can affect any artery in the body, coronary, carotid, aorta, renal and leg arteries. When clogged arteries in the legs, intermittent claudication may appear to be manifested as muscle pain or buttock twin forcing suspend the march. May also be a weakening in artery walls dilatation of provoking them, generating called aneurysms. An aneurysm, according to their location, can be very dangerous as it can crack and cause severe bleeding.
What is Peripheral arterial disease ? 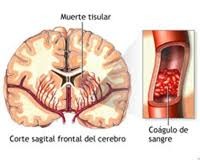 STROKE IMAGE
CEREBROVASCULAR DISEASE
is a major cause of death and disability in developed countries
Cerebrovascular disease refers to a group of conditions that affect the circulation of blood to the brain, causing limited or no blood flow to affected areas of the brain.

Atherosclerosis is one of the conditions that can cause cerebrovascular disease. During this process, high cholesterol levels coupled with inflammation in areas of the arteries in the brain can cause the cholesterol to build up in the vessel in the form of a thick, waxy plaque. This plaque can limit, or completely obstruct, blood flow to the brain, causing a stroke, transient ischemic attacks, or dementia, which may lead to a variety of other health complications.
What is an Stroke
TREATMENTS Carotid localization and plaque to be removed

Endarterectomy scheme
Carotid endarterectomy is an operation during which your vascular surgeon removes the inner lining of your carotid artery if it has become thickened or damaged. This procedure eliminates a substance called plaque from your artery and can restore blood flow. MORE INFORMATION IN VASCULAR WEB: http://www.vascularweb.org/vascularhealth/Pages/carotid-endarterectomy.aspx
Carotid endarterectomy explanation by Dr. Roche
Currently treatments are also performed by introducing catheters via the femoral artery. They are called angioplasty accompanied by stent implantation. This type of intervention is usually indicated in older patients or more severe comorbidities 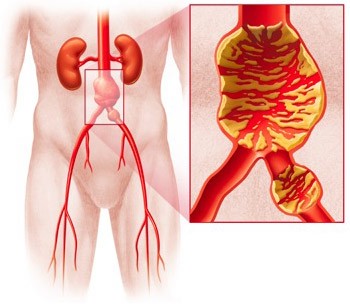 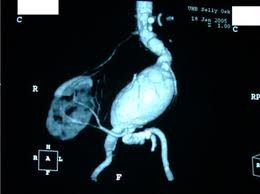 ANEURYSM ARE ARTERIES DILATION
that can produce a rupture causing severe bleeding
An aneurysm is a balloon-like bulge in an artery. Aneurysms can form in arteries of all sizes. An aneurysm occurs when the pressure of blood passing through part of a weakened artery forces the vessel to bulge outward, forming what you might think of as a blister. Not all aneurysms are life threatening. But if the bulging stretches the artery too far, this vessel may burst, causing a person to bleed to death. An aneurysm that bleeds into the brain can lead to stroke or death.
TREATMENTS
There are different operations to treat the different kinds of aneurysms. Here we will talk about the surgery to treat aortic aneurysms, those that occur in the body's main artery. Surgery to repair an aortic aneurysm depends on the size and location of the aneurysm and your overall health. Aortic aneurysms in the upper chest (the ascending aorta) are usually operated on right away. Aneurysms in the lower chest and the area below your stomach (the descending thoracic and abdominal parts of the aorta) may not be as life threatening. Aneurysms in these locations are watched for varying periods, depending on their size. If they become about 5 centimeters (almost 2 inches) in diameter, continue to grow, or begin to cause symptoms, you may need to have surgery to stop the aneurysm from bursting. involves replacing the weakened section of the vessel with an artificial tube, called a graft. This means that surgeons will have to open either the stomach area (for abdominal aneurysms) or the chest (for thoracic aneurysms). 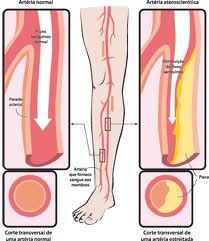 INTERMITENT CLAUDICATION
IS A WARNING SIGN THAT ARTERIES ARE BLOCKED
Peripheral artery disease is a condition of the blood vessels that leads to narrowing and hardening of the arteries that supply the legs and feet.
The narrowing of the blood vessels leads to decreased blood flow, which can injure nerves and other tissues.Peripheral artery disease is caused by arteriosclerosis, or "hardening of the arteries." This problem occurs when fatty material (plaque) builds up on the walls of your arteries. This causes the arteries to become narrower. The walls of the arteries also become stiffer and cannot widen (dilate) to allow greater blood flow when needed.
As a result, when the muscles of your legs are working harder (such as during exercise or walking) they cannot get enough blood and oxygen. Eventually, there may not be enough blood and oxygen, even when the muscles are resting. 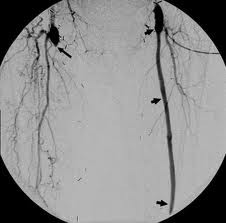 Bypass femoro-popliteal performed in left leg
Revascularization of the lower limbs consists in improving the distal blow flow . Currently the first choice of revascularization is endovascular recanalization with angioplasty and implantation of a stent . If it is not possible we will perform the ordinary bypass. To perform a bypass is recommended the use of autologous grafts taken from the body as the saphenous vein. However, in some cases it is necessary to use prosthetic material such as Dacron or PTFE.
What is angioplasty and stenting
PAD can progress to dramatic situations such as loss of a limb or part thereof. It is essential to early diagnosis and control of the various risk factors. Of these, diabetes is one of the greatest enemies of the arteries as it not only contributes to progressive arterial obstruction if it affects the sensitivity of the skin making it more prone to injury.
Dr. ENRIC ROCHE REBOLLO

Angiologist and Vascular Surgeon. Association member no. 28119
Graduate of the FACULTY OF MEDICINE of the Provincial Hospital Clinico Central University. Resident Locum in ANGIOLOGY and VASCULAR SURGERY GERMANS TRIAS I PUJOL UNIVERSITY HOSPITAL of Barcelona 1993 -1997
Since 1999 to april 2015 was Head of the Angiology and Vascular Surgery Department of the Hospital Plato of Barcelona. Currently is also Medical Director of CLINICA VASCULAR BARCELONA in Barcelona.
Actually in QUIRON GROUP Head of the Angiology ans Vascular Surgery Department of the Hospital Sagrat Cor of Barcelona and Hospital General de Cataluña.

Author of about thirty articles and speaker at congresses and round tables on the speciality on more than 100 occasions. PhD courses carried out at the Autonomous University of Barcelona 1995-1996
He has a Master in Hospital Management and Health Care Services Management (2000-201) from the Central University of Barcelona and he did post-graduate courses on Quality, Process Management and EFQM Continuous Improvement Systems, and he takes an active part in his hospital’s committees.
He’s also Medico-legal specialist and member of council of medical college of Barcelona since 2010.

He has been the organizer of meetings on the speciality where Tecnovasc 1999, 2001, 2003 and 2005 (www.tecnovasc.com) stands out as an international symposium on technological breakthroughs in vascular surgery and the first spanish workshop meeting on the Tessari sclerotherapy method in 2004.

He has been coordinator of vascular surgery attention between Primary Care and Hospital Care of the Esquerra de la Eixample (a geographic area with 600,000 inhabitants which includes the hospitals Hospital Clinic, Hospital Sagrat Cor and Hospital Plato) since 2007.

Within the speciality, he has dedicated special attention to the treatment of chronic venous disease through minimally invasive techniques and he has promoted endovenous procedures like the endolaser, radiofrequency and ultrasound-guided sclerosis with foam (www.solucionvarices.com). Likewise, he has created a fast circuit for attending to lower limb ulcers in his area of reference.

During 2007, Dr. Enric Roche was Dr. Juan Cabrera collaborator in Barcelona in the treatment of varicose veins with microfoam. During 2008 and 2009 he was director of the International Institute of Phlebology which applied the technique of microfoam sclerotherapy in varicose veins and vascular malformations.

Currently, his professional activity is carried on in HOSPITAL PLATÓ and CLINICA VASCULAR BARCELONA.